Which version of macOS ?

YoYotta requires an Apple computer running macOS 10.12 or newer, however macOS Monterey or Big Sur is recommended.
macOS Catalina 10.15.7 or newer is required for the following workflows.

YoYotta Transcode decoding and encoding H.265/HEVC requires macOS 10.13 or newer
Finder QuickLook and Quicktime playback of most MXF files is supported with Catalina or newer and Apple Pro Video Formats.
32 bit apps and drivers are no longer supported on Catalina or Big Sur, so check support for legacy hardware before upgrading. YoYotta runs well on Apple Silicon Macs or Intel Macs.
Any Mac running Big Sur, Monterey or Ventura will need software drivers for SAS and FibreChannel interface cards and Thunderbolt LTO drives.
Thunderbolt units have a SAS LTO drive inside, so they will need a SAS driver.
TAR restore is only supported on Intel Macs. No support on Apple Silicon Macs

macOS 10.11 has issues with SSL certificates, so it still works, but is not recommended.
If there is no option you can enable SSL, see these instructions.
Enable YoYotta SSL certificates

Computers from 2008 and earlier do not support a newer macOS.
For these systems we would upgrading to an Apple Silicon Mac mini and move your ATTO SAS or FC card inside a Sonnet Thunderbolt enclosure.

A good way to upgrade if your macOS supports APFS is to add a new volume and install on that. This leaves the old volume available for booting.
If you have a fixed drive inside your Mac then ensure you use a program like SuperDuper to backup the entire boot drive to an external drive.
Then reformat the internal drive.
This gives you a clean install, but doesn't destroy the data on your old system. So if needed you can boot the old macOS or copy across items that are missing.
Even if you don't want to update to a new major version, we would recommend that you run the latest minor version. For example if you are on 10.12.2 update to 10.12.6.

Please get in touch with support@yoyotta.com if you need any help or have further questions. 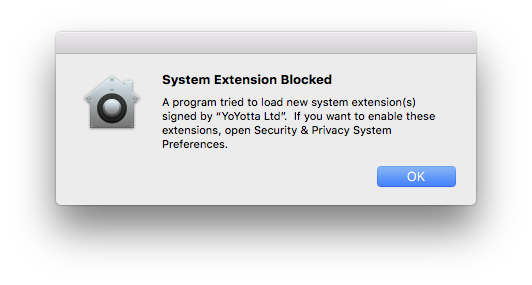 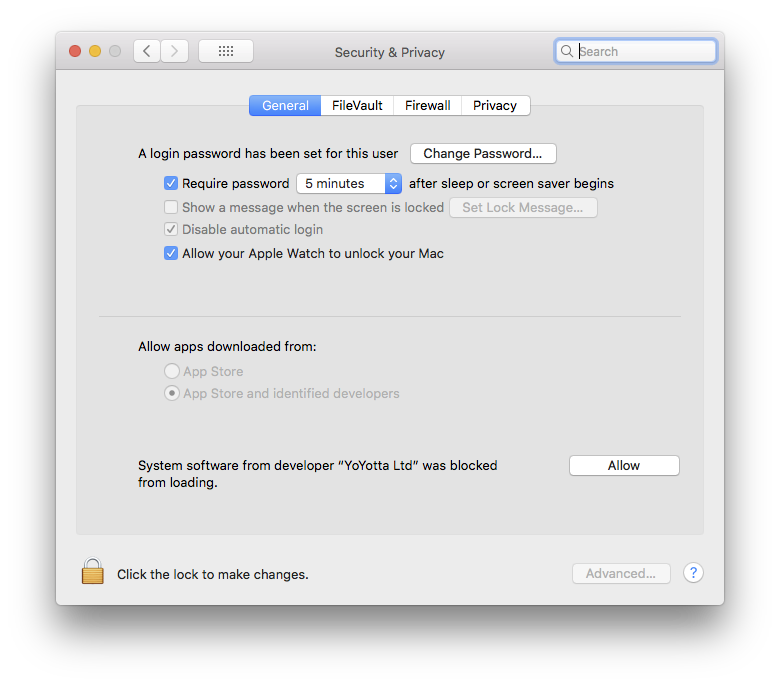 New installs of drivers and system software from ATTO, OSXFUSE (developer is Benjamin Fleischer) may need approval.
You will see a message saying System Extension Blocked
Also the first time you use YoYotta to read TAR tapes on a new system, you will need to approve YoYotta System Software.
Open the Security & Privacy page in Apple System Preferences, unlock the padlock and click Allow to enable the System software to load.

You must click the Allow button locally on the Mac, clicking using remote screen sharing will not work.
If the Allow button is not shown then reboot your Mac, try again to use LTFS or TAR tapes (which will fail) and then check the Security & Privacy page again.
Also ensure that you have the latest macOS 10.13.6, 10.14.6, 10.15.7, 11.6.5 or latest Monterey 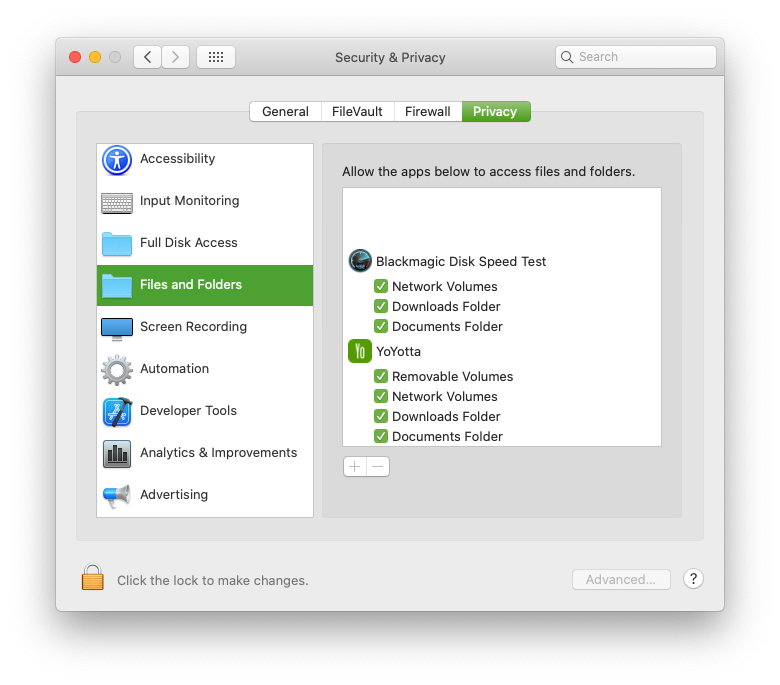 When running YoYotta with newer macOS versions you may see requests to allow access to folders like Documents, Removable Volumes or Network Volumes. Please allow these requests.
Also you can enable access in Files and Folders in the Security tab as shown in the screenshot.
YoYotta does not need Full Disk Access.

YoYotta keeps the Mac awake when jobs are running.
However when working with LTO tapes it is best to also disable system sleep in System Preferences. Leaving screen sleep enabled is fine.

If using remote screen sharing, then when sharing stops the Mac can be locked and start sleeping.
To prevent this, type the following into the Apple terminal. You will need to enter your Mac account password.
sudo defaults write /Library/Preferences/com.apple.RemoteManagement RestoreMachineState -bool NO

Which Apple computer to use with YoYotta software ?